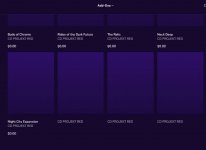 While we wait for the v1.2 update, the Epic Game Store has given away what could be coming up for Cyberpunk 2077 as far as DLCs are concerned.

As we already know, some future DLC will be free, and in the list that's been spotted, some of it may include smaller things that perhaps some us expected to see in the initial game release. The entries that appeared on Epic read:
According to the discovery by Prickly Assassin, the free DLCs went from 18 free DLCs down to 10 this week and three paid DLCs have been recently been added.

We'll have to wait and see what happens with these entries but at least it gives fans something to get excited about as far as new content is concerned. More importantly, we need to see that v1.2 patch appear along with the full patch notes. With any luck, CD Projekt will hit their end of March target and we'll see the patch next week.
You must log in or register to reply here.
Share:
Facebook Twitter Reddit Pinterest Tumblr WhatsApp Email Share Link
Remove ads & support the site - Get PurePremium
Top Bottom