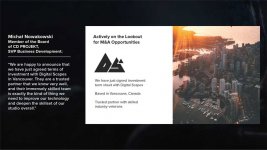 During the latest investor update from the CD Projekt, they have announced the acquisition of Canadian studio Digital Scapes.

Digital Scapes worked alongside CD Projekt during the development of Cyberpunk 2077 helping with numerous areas of the game's development.


“We are very excited to join a studio that forges the incredibly engaging, vastly scoped experiences, such as The Witcher trilogy and Cyberpunk 2077. We believe our contribution in the area of gameplay and technology can make them even more captivating. Being a Polish Canadian, I personally take great satisfaction in building bridges between the Canadian and Polish game development industries.​
​
“This is a great opportunity for Canadian developers to get involved with CD Projekt RED’s incredible IP and for CD Projekt RED to tap into Canada’s deep talent pool and game-making craft.”​
Click to expand...